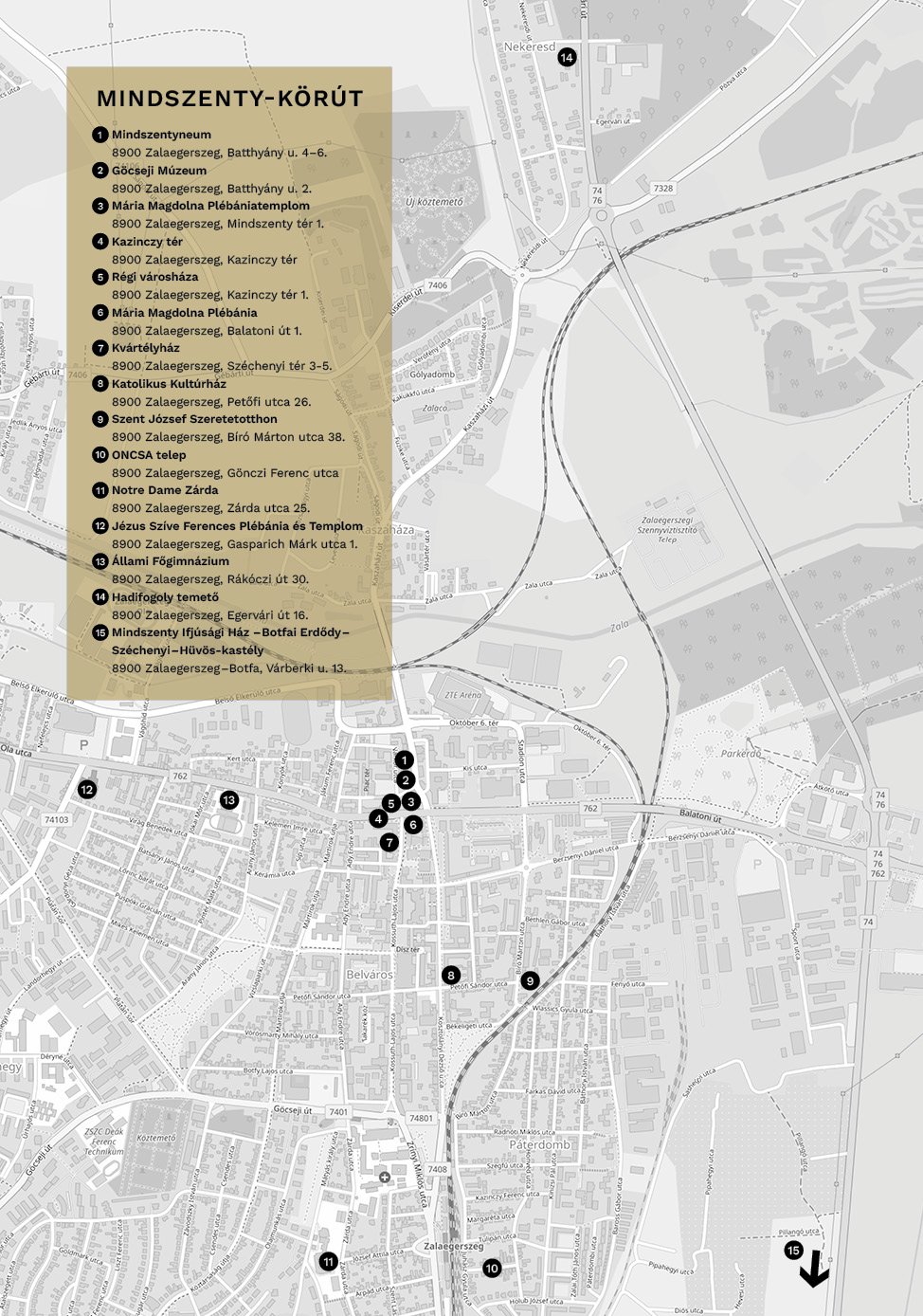 Mindszentyneum is both the starting and the end point of the Mindszenty Route, and is also the venue for the permanent exhibitions on the life of Cardinal József Mindszenty, Prince Primate, Archbishop of Esztergom, and The Persecution of the Church under Communist Dictatorship. The building also hosts community spaces and pilgrimage meetings.

József Mindszenty himself also called for the creation of the Göcseji Collection, which was one of the precursors of the Göcseji Museum. The museum hosts a new exhibition on the history of the town, permanent exhibitions of selected works by sculptors Zsigmond Kisfaludi Stróbl and János Németh, as well as György Fekete, and the renewed building will continue to host temporary exhibitions.

The parish church of Zalaegerszeg was built in the middle of the 18th century by Bishop Márton Padányi Bíró of Veszprém. Its altar and frescoes were painted by the famous Viennese painter Cimbal. The building has not changed much over the years, and its furnishings are still the original. Between 1919 and 1944, Titular Abbot József Pehm (Mindszenty) served in this church and created a flourishing religious life within its walls. He knew his parishioners personally, not only offering them spiritual consolation, but also supporting the poor and helping them with their affairs. In return, he expected respect for authority and a virtuous life. From the pulpit he also encouraged them to do the same. The solemnity of the masses was enhanced by the church choir he organised, which also became an important part of the cultural life of the town.

The main square of Zalaegerszeg was once formed in the widening out of the roads leading to Zalaegerszeg from the west and south. Already in the early Middle Ages, the church of the market town stood here, and in the 18th century the most important public buildings were built around it: the town hall, the inn, and the parsonage. For centuries, the main square was also the market square and the venue for numerous secular and ecclesiastical events. In 1948, on the occasion of the Marian Year, it was here that the former parish priest of the town, Cardinal József Mindszenty, Archbishop of Esztergom, celebrated his last open-air mass. The event was not only a tribute to the Virgin Mary, but also a protest against the Communist dictatorship that was taking over. The party tried to prevent it in every way possible, but a huge crowd of 25,000 people listened to the Archbishop for the last time in Zalaegerszeg, who urged them to remain in their faith.

The first town hall was built in 1787 in the main square of Zalaegerszeg, which was later rebuilt several times. In 1898, it acquired its eclectic appearance, but by the middle of the 20th century, the town’s offices had outgrown the building and a new one had to be found. Between the two world wars, Titular Abbot Pehm often visited the beautiful corner house, sometimes to visit his friend, Mayor Mátyás Czobor, together with whom they supported each other in developing and building the county seat, and sometimes to attend the meetings of the council of representatives as one of the town’s largest taxpayers. He was one of the initiators of the establishment of the Göcseji Collection, whose growing number of antiques were exhibited in the empty rooms of the town hall. However, World War II destroyed the small collection, and the museum was not established until 1950, when it was housed in the former town hall for two decades.

The building of the parsonage in Zalaegerszeg was built in the second half of the 18th century by Bishop Ignác Koller of Veszprém, as the parish office and home of the priests and chaplains who served here. It stood unchanged in the main square for 170 years, but in 1936, thanks to Titular Abbot József Pehm, it was extended by a second storey and a beautiful neo-Baroque façade. The parish priest who renovated the building lived within its walls between 1919 and 1944 together with his chaplains and, at one time, his teachers of religion, so the parsonage was colloquially known as the “pehminary” in town. Its banquet hall was decorated with a painting of József Pehm’s idol, Bishop Márton Padányi Bíró of Veszprém. As a tribute to him, the parish priest wrote an excellent biography of him after years of historical research. The two-volume publication was published in 1934 by Zrínyi Printing Company, his own publishing house in the neighbourhood of the parsonage.

The Billet House is still one of the most impressive buildings in the centre of Zalaegerszeg. It was built for soldiers during the reign of Maria Theresa, but since the 1870s it has been used as the county hall. It was rebuilt in the 1920s to its present form. Between the two world wars, the building was often visited by the titular abbot of Zalaegerszeg, József Pehm, who was one of the county’s largest taxpayers and therefore a member of the county’s committee of jurisdiction. Numerous speeches and ceremonial addresses have been preserved in the minutes of the General Assembly. He was also a regular visitor to Zoltán Bődy’s home, with whom he was good friends. As one of the persons responsible for extracurricular education and as a bishop’s delegate, he did much for the intellectual uplift of the people of Göcsej by building schools and churches.

The building, now known as a self-service restaurant, was built in 1914 as the headquarters of the Catholic Young Men’s Club and later became the home of the Catholic Community. The young parish priest of Zalaegerszeg, József Pehm, organised a vibrant social life here, and the old and new religious, charitable, and cultural associations he founded were operating here. By the end of the 1920s, the house had become too small and had to be extended. Its banquet hall on the Queen Elizabeth Street side was enlarged by nine metres, a modern stage was added, and the name was changed to Catholic Culture House. In the renewed building, numerous educational lectures, balls, dance schools, and concerts were held, and performances by amateur actors followed each other on the stage. A skating rink was opened behind the building in winter. After the war, the town cinema moved here, and in 1964, it became a restaurant.

The St. Joseph Rest-Home was the last in a series of buildings initiated by József Mindszenty (Pehm) still as titular abbot in Zalaegerszeg, where the elderly and sick poor of the town were accommodated in humane conditions. The economic crisis created a great demand for the shelter, and in 1942, it had to be expanded. The destitutes treated here were cared for by the generous women of the parish, the town, and the Social Missionary Society, but they could also count on donations of money and food from the faithful, who were regularly reminded of their duty to the poor by the parish priest. In the summer, the house was full of life, the courtyard filled with children’s noise, because during the time of great agricultural works, the children of poor families were welcomed in a kindergarten here, where they were looked after and provided with a healthy diet, the necessary food being provided by public donations.

In 1941, the National Fund for the Protection of People and Family (abbreviated as ONCSA) launched a campaign to build small apartments across the country to facilitate housing for the poor in Hungary. Zalaegerszeg joined the movement, with ONCSA houses built in Ola, Kaszaháza, and Páterdomb. The small housing estate on the other side of the railway station was named Göcsejszeg and its houses were built using the characteristics of Göcsej folk architecture. It was home to families with many children, who raised their children in an exemplary manner, had jobs, could pay their mortgage instalments, and were morally upright. The town’s parish priest, József Pehm, had a decisive word in their selection. He gave one of the welcoming speeches at the inauguration ceremony, then presented the residents with a crucifix and consecrated the buildings.

(Today: József Mindszenty Elementary School, Grammar School and Hostel) In 1929, a school complex was built in Zalaegerszeg, initiated by Titular Abbot József Pehm, and run by the nuns of the French Teaching Order of Notre Dame. It included a Catholic elementary and higher elementary school, a teacher training college, a boarding school, and a convent. The school included a chapel, a modern gymnasium with a stage and projector, labs, handicrafts rooms, and training kitchens. The teachers provided a high quality education and a colourful student life for the girls who attended. The most important part of the school complex was the teacher training college; the teachers who graduated here also played a part in eliminating the backwardness of Göcsej. The Notre Dame Convent had become an important cultural space in the town, hosting, among other things, the large exhibition of the Göcsej Week organised to boost tourism in the area.

The Franciscan Parish and Church of the Sacred Heart of Jesus1 Gasparich Márk Street, 8900 Zalaegerszeg

The second church of the town, the Franciscan church, was built in the Ola district of Zalaegerszeg. It was built thanks to the town-building activities of Titular Abbot József Pehm who dedicated it to the memory of the last Hungarian king in exile, Charles IV. He set up a Church Building Committee for its realisation, which he directed. A Franciscan monastery was also built next to the church, based on the neo-Baroque designs of Iván Kotsis of Budapest. Work began in the summer of 1925. A year later, the friars were able to move into the monastery, and the consecration took place in September 1927 in the presence of a huge crowd, the ceremony being celebrated by Bishop János Mikes of Szombathely. On the main altar of the building with a transept, there is a statue of the Heart of Jesus, while the pulpit was donated to the church by Queen Zita. The Franciscan friars, who lived in great poverty in the monastery, did their best to serve the faithful and God, and were loved and appreciated by the people of Zalaegerszeg.

Zalaegerszeg’s first grammar school – thanks to the intervention of Gyula Wlassics, the Zalaegerszeg-born Minister of Culture – was founded during the millennium, and teaching began in September 1897. In 1917, during World War I, the young József Pehm was appointed here as a teacher of religion. Due to the shortage of teachers, he also taught Latin and became a substitute form master for the fourth grade. Among others, he also taught Dezső Keresztury, the future literary historian and Minister of Culture. In addition to teaching, he led the school’s Catholic student organisation, the Congregation of Mary.
In the autumn of 1919, József Pehm was appointed parish priest and left the grammar school teacher’s desk, but kept his eye on the school. He took care of the poor but talented children from Göcsej who had been sent to the school, and provided them with board and lodging.

During World War I, in 1915, a prisoner-of-war camp was established north of Zalaegerszeg, on the outskirts of the village of Pózva, where initially Russian, then Serbian, Romanian, and Italian soldiers were held. József Pehm, who was then a young teacher of religion at the grammar school, regularly visited the Catholic soldiers. He celebrated mass in the church barracks, confessed and gave communion to the prisoners, and offered them spiritual comfort. The deceased were laid to rest in the cemetery established near the camp. The number was not small, with 1,656 soldiers resting under the graves. The POW camp was later converted into an internment camp, and then into a tuberculosis sanatorium.
In 1927, the cemetery was landscaped, a memorial was erected for the deceased, and in 1930, an obelisk was erected in memory of those who had died in the mass graves, unveiled by Titular Abbot József Pehm.